When Colin was born, we were given a list of potential health problems that can occur in children with Down Syndrome and developmental timelines in which we should be getting evaluations done. The first major specialist that we needed to see ON the day Colin was born was the cardiologist and then for follow up visits in his office. Many children with Down Syndrome have heart defects that need to be corrected; fortunately, despite the fact his heart rate was very low and not coming back up just prior to delivery, his heart was completely healthy. Over the past 6 years, we have seen and/or continue to see a gastroenterologist (digestive), ENT (ear nose and throat), audiologist (hearing), endocrinologist (hormones), hematologist (blood), ophthalmologist (eye), urologist and various developmental pediatricians.  In addition, he has had many tests done to rule out various health conditions including many, many blood ﻿tests, cervical x-rays, hearing tests, urine/stool tests, and various other minor tests. We are so thankful that most of our visits to these doctors have been checkups or monitoring and not because of any significant health concerns. 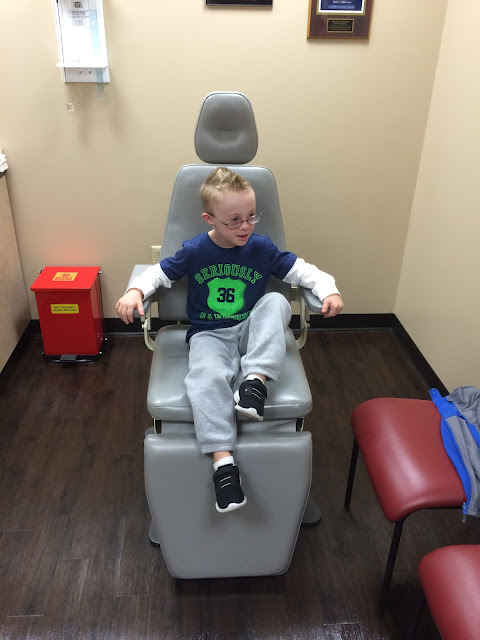 Colin was due for his yearly checkup with the ENT and audiologist and we were also feeling a little bit more urgent about seeing them because Colin has been exhibiting some symptoms and behaviors that we weren't sure if they were structural/functional or just behavioral.  We can't pinpoint exactly when it started but it has been very noticeable that in the past month Colin will often cover his ears and say it's too loud, and even cry, in certain situations. It wasn't consistently just loud environments (which he has always been able to tolerate). In addition, he has been asking us to repeat what we say (especially in the car when his left ear is facing us), and he has occasionally complained about his ear bothering him (not as often). In addition, he gets up several times a night even though he goes right back to sleep when we lay with him (we didn't necessarily connect that until today). The doctor has been monitoring his tonsils for years now because they are more enlarged than typical children and his passageways (ears, nose, throat) are smaller than most. 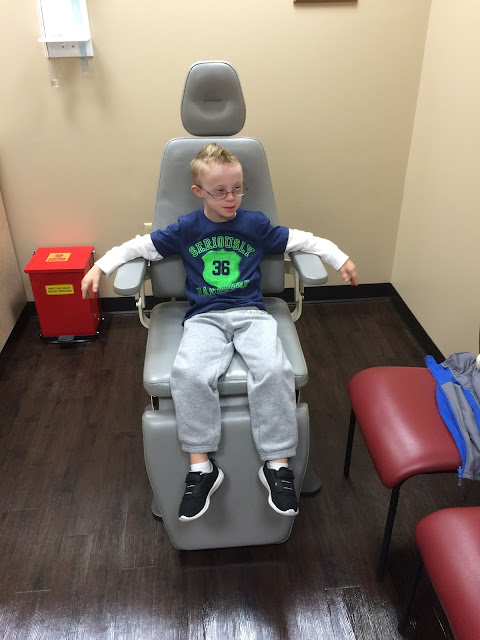 Today we found out that his tonsils are so enlarged that they are preventing fluid from properly draining from his ears causing a buildup, especially in his left ear. This is more than likely causing his sound sensitivity and the fact he is not sleeping well at night. He's probably been really uncomfortable and we didn't even know. As a result, he needs to have his tonsils and adenoids out as well as have the fluid drained from his left ear. This needs to be done sooner than later because it could set off a chain reaction of other problems. 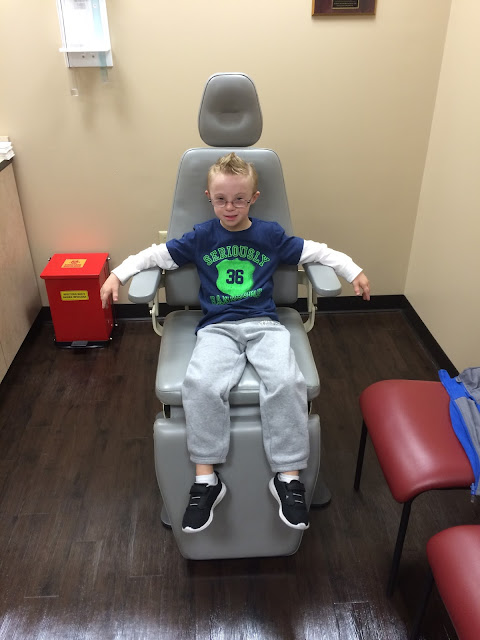 It was a double edged sword hearing the information today because I am happy we have answers and a solution that will give him relief and an improvement in his hearing, but I am really bummed that he has to have surgery in order to get that solution (even though I did always know this would be a possibility). We are working to schedule it over Christmas break to minimize the amount of time he has to be out of school for. Hoping the surgery will go as smoothly as possible!
Posted with love by Kelli at 8:11 PM