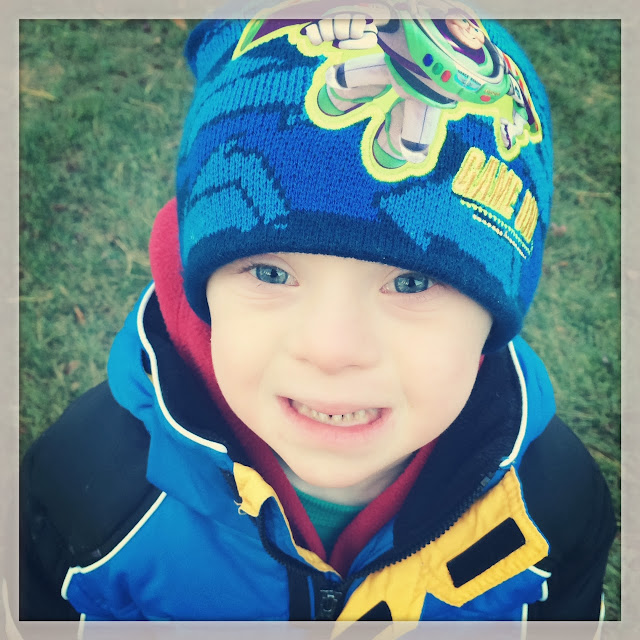 ...and I can't stop looking at it.  I am drawn into those beautiful blue eyes of his and my heart is just filled with love.  It's been a rough week but mostly because I think we are dealing with some issues again because of his anemia (he's been off of the iron supplement for a few weeks so that the most recent blood work would show the true levels of some other numbers the hematologist is trying to get) and he's been pretty stubborn.  He seems tired during a lot of activity so I'm hoping to figure some of this out soon.  I've also been struggling with the potty training stuff but then he went ahead and told our friend Jorie today that he was going to go potty, went into the bathroom by himself, undressed and used it without any help (nor were we even allowed in the room).  He constantly finds ways to remind me to be patient (even though it's not always easy).  It's been fun watching his progress in other areas lately though because he's been making such great strides with his handwriting (especially his motivation to use a writing utensil) and his language. 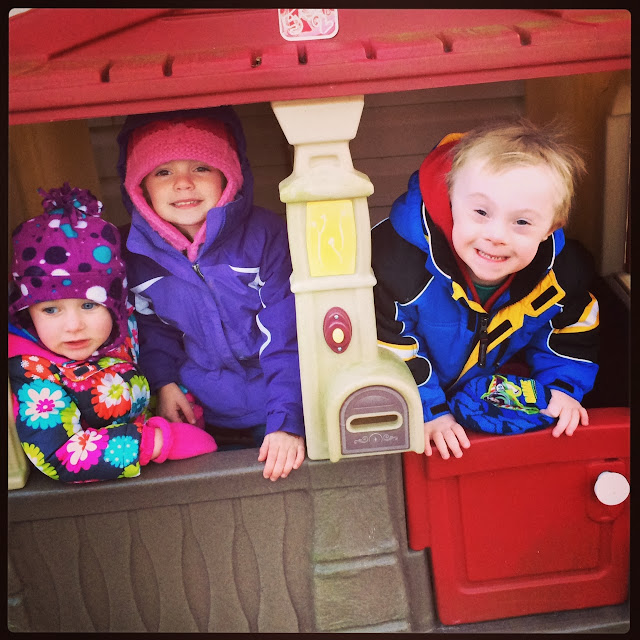 We had a fun playdate today with our friends and I love seeing our kids together.  It was a great way to end the weekend! 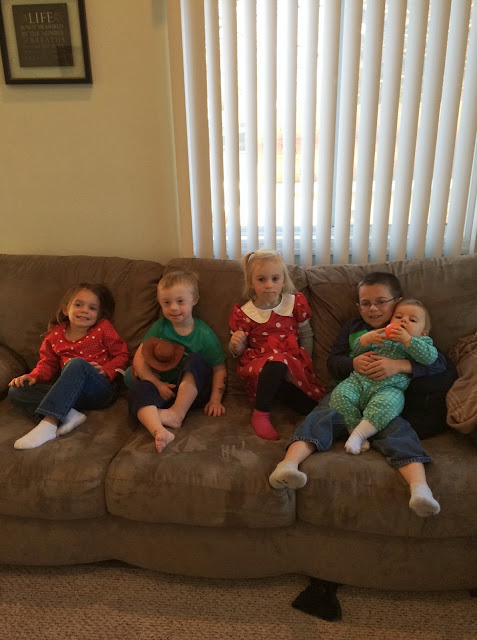 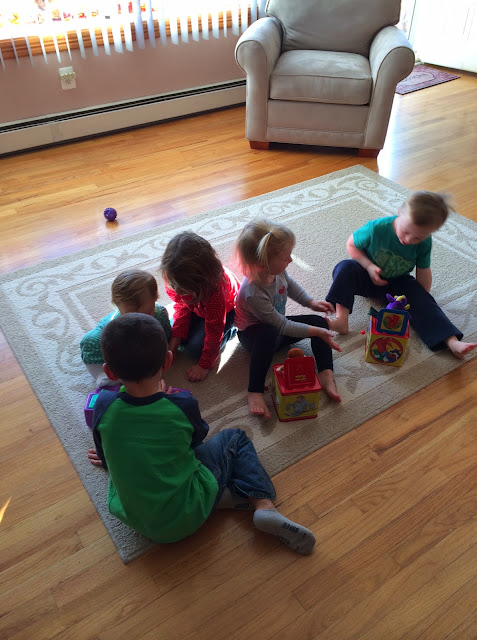 Posted with love by Kelli at 8:33 PM No comments:

When Colin was born, Chris and I spent a good amount of time searching for a daycare facility that would be the best fit for him.  Our anxieties were higher at the time because it was really important to us to make sure that we were always working on things we were learning in therapy to help Colin.  It makes me laugh looking back on it because our list for our "babysitters" (family and friends) included what exercises or activities they should be doing with him.  When we found a place that we felt the most comfortable with, the teachers that worked with him went above and beyond and always did what we asked of them.  Colin had a group of friends that grew up with him from class to class.

When it became evident that we were going to have to find a new facility for Colin and Kailey this year, we were really upset that we were going to have to start both of them (but especially Colin) in a new place away from the kids they had literally grown up with and away from the teachers who had done so much to help Colin throughout the years.  He had his group of buddies who treated him as if he were any other kid and never saw the true differences.

Using some pretty valuable references, we started Colin and Kailey in the new daycare this year.  Colin's teachers have been really open to trying new things with him, working hard on skills, and pushing him to do new things (for example, standing up to pee in the potty!).  Despite our initial worries and concerns (mostly because of a bad experience in trying a new place with Colin last year), we have been really happy with the change and feel that we have now found another place that is allowing our kids to grow in the best possible way away from us.  In addition, Colin has really found a group of new friends who are treating him just the same.  They are such a cute group because they always have to make sure they give Colin hugs and kisses when he leaves to go home (and vice versa) and seem genuinely happy to spend time with him.

He was invited to a birthday party today at a bounce place that I was initially hesitant to say yes to.  It was a Sunday and I didn't really know any of the other parents but I thought it would be a good experience to meet new people and see Colin interact with his friends.  I am so happy I decided to go because when we walked in, one of the girls screeched "Hey guys! Come here! Colin's here!!!!!" and they all ran over to give him hugs and high-fives.  A few of them even turned to their parents to say "mom! dad! That's Colin!".  I literally had tears in my eyes because I realized then that adults could learn a very valuable lesson from young children. 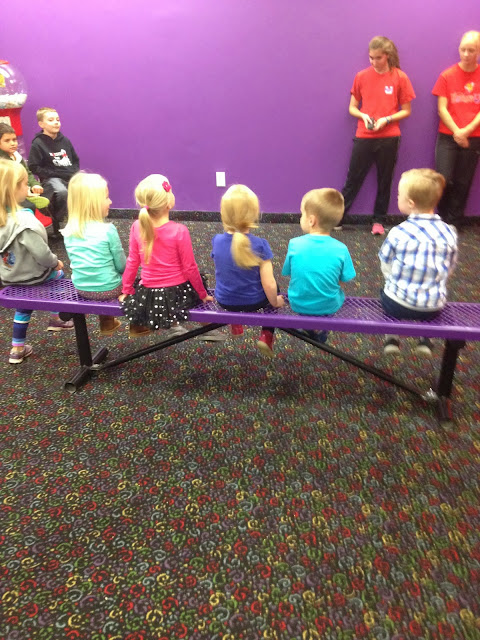 These children play with, interact with, and help him without seeing the differences that exist in their makeup.  They were patient when he couldn't climb up the ladder fast enough, gently coaxed him into trying new things and led him from one activity to the next without paying attention to the fact that it was a little bit harder for him to do some things. They were genuinely happy to just play with their friend. When does it become such a fight to have kids with disabilities included into general education classrooms?  When does the separation start in some instances?  Life is so simple for young children.  Sadly, everything about education is becoming so negative these days, regardless if you are talking about special education or regular education.  I think we could all learn a thing or two from kids... 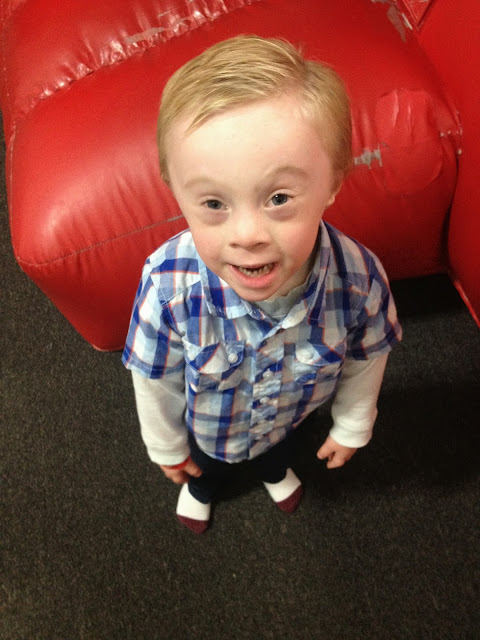 I so wish I could post some of the group pictures I got of Colin with his friends.  It makes me so incredibly happy to look at them and see these kids pose with their arms around each other.

....just another reminder that Colin is more alike, than different...

It's hard to believe that we blinked and the fall is over already.  Now that our "winter" season has started, it also means that basketball season is upon us, one of the things that Colin really enjoys attending.  While I wasn't crazy about going to the basketball game on a school night, I wanted to bring the kids to see Chris since he's been working so much and the next home game won't be for a few weeks.

I attempted a quick dinner on the way by myself with the kids and I'm not so sure I'll be doing THAT again any time soon. 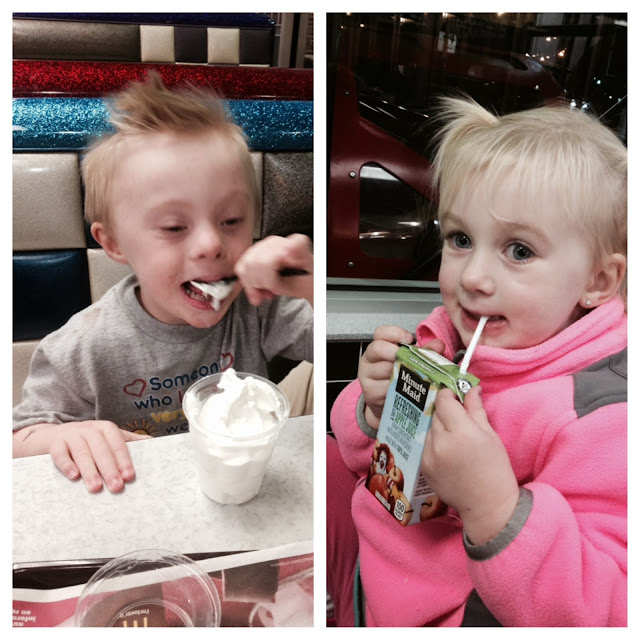 Colin was really excited when we got to the Hawks basketball game but I could tell that he was wearing his nervous face.  I think that he has to adjust to this kind of environment again and I also think that he was pretty tired from school and then feeding therapy today.  Kailey was also excited, but sat calmly as soon as she got her bucket of popcorn. 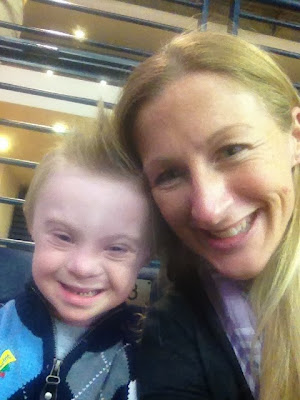 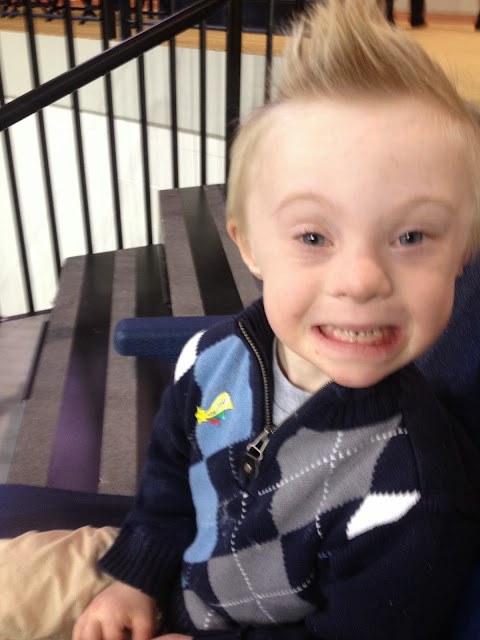 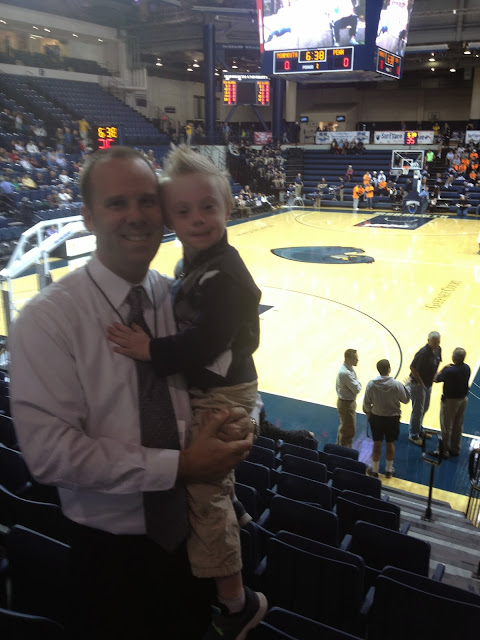 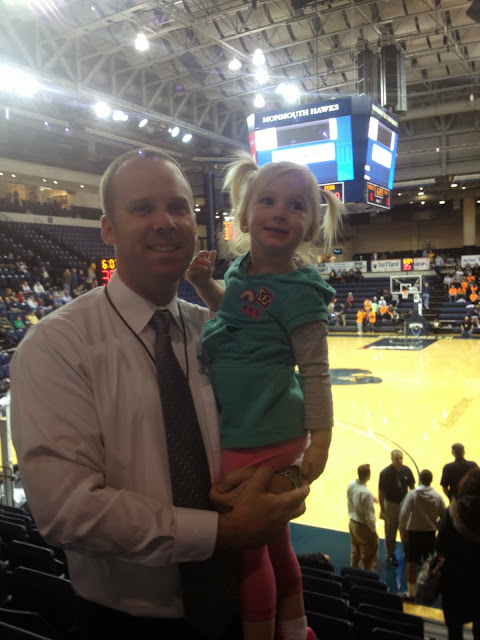 The thing that I am going to find to be the most difficult this season is the fact that Colin could sit and watch the game but Kailey does nto have the patience to do the same.  Fortunately, there are areas for them to run around and lots of other kids as well. 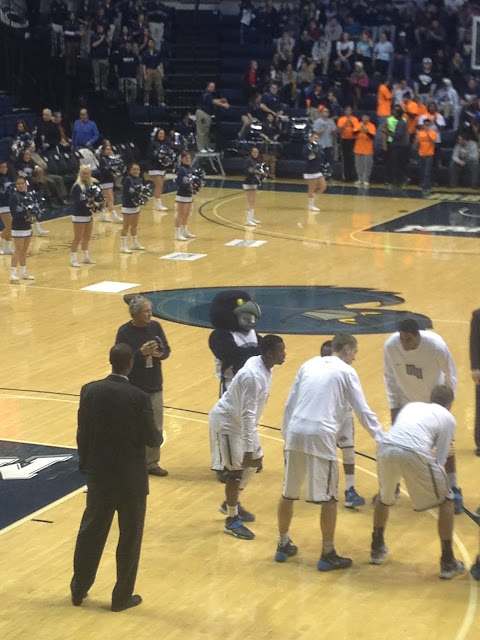 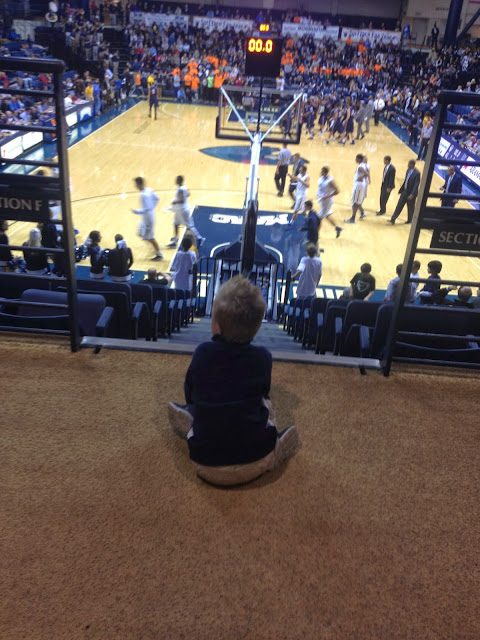 Here's to another basketball season! 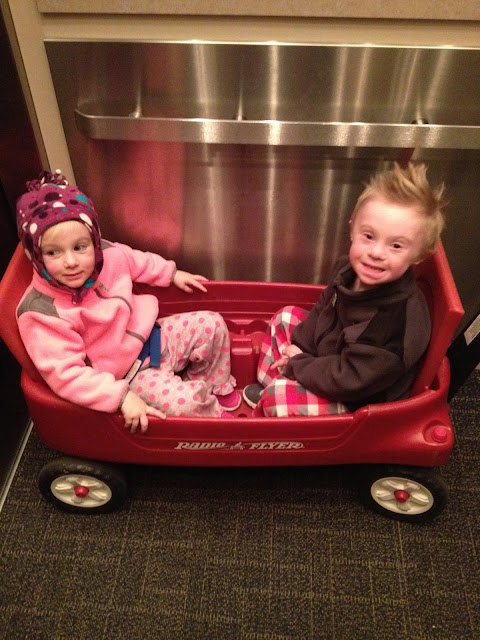 Posted with love by Kelli at 10:20 PM No comments:

Chris has been traveling a lot for work lately and Colin is having the hardest time out of any of us.  As long as we stick to a pretty normal routine he does ok and with the added benefits to technology, we get to "see" him pretty regularly.  However, towards the end of a long stretch, Colin often gets weepy and starts asking for his Daddy more and more. 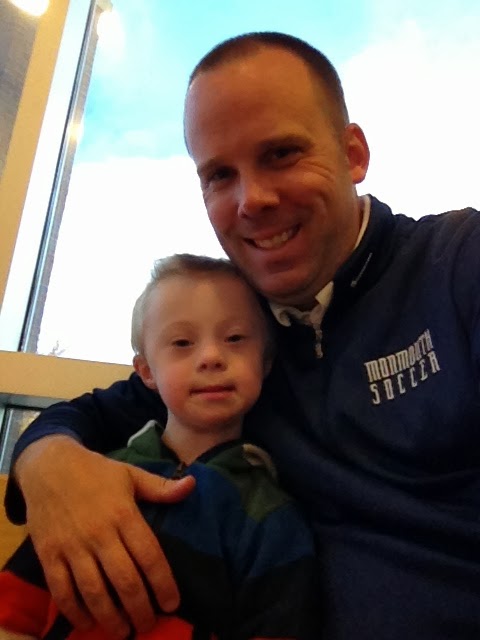 There is nothing quite like the reaction of a little boy who has really been missing his Daddy when he comes home!  They are the best of buddies!


Posted with love by Kelli at 8:51 PM No comments: