I recently met up with a mom of a beautiful little girl with Down Syndrome who is a little over a year old.  We were chatting about her progress in different areas and talking about Early Intervention.  I told her how far removed I felt from that time in Colin's life yet the memories were still so vivid in remembering how far Colin has come in the last 5.5 years.  Throw in some #tbt (throwback Thursday) picture digging to find some gems of Colin when he was little and with some of our favorite therapists, and so many things came rushing back.  ﻿ 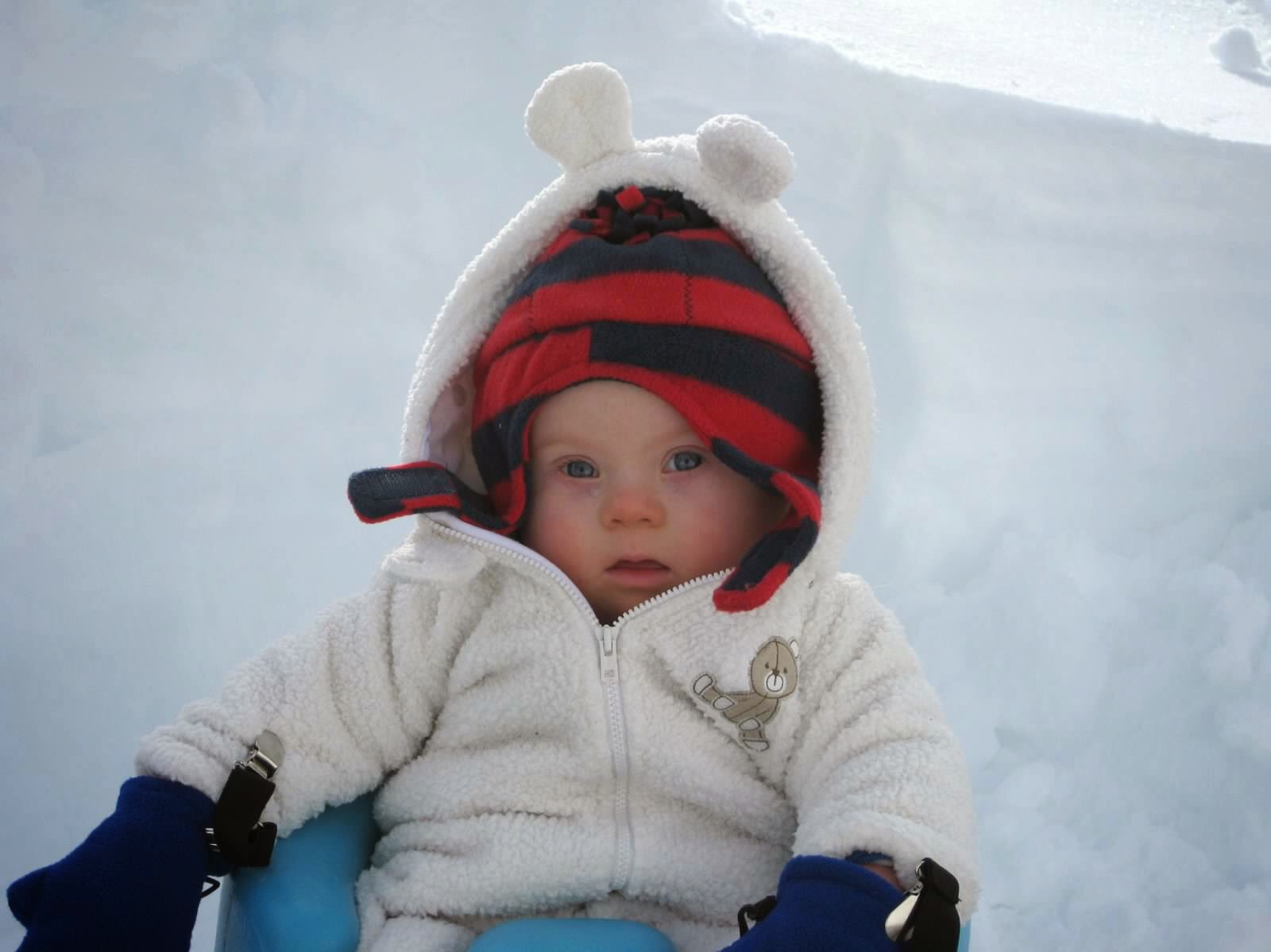 One thing I have always been so grateful for on our journey with Colin is that we have been given the gift to slow down time.  Because things have always happened on his time and when he was ready with all of the necessary skills needed, we have always been able to celebrate the little things that tend to get passed by with typical kids.  Watching that little girl crawl around reminded me of each little success we celebrated because the end result always took so long to get to.
﻿
Being with that family that day was a good reminder that I needed to take some time to look back and see how far Colin has come.  I have to laugh because there were so many things during those years that felt so hard and I had trouble seeing what the end would be like in the future for accomplishing a particular skill.  Those things that we struggled with and worried about seem so silly now with the things that we feel are our "bigger issues" (Kindergarten success) BUT it's all part of the journey and I think life has a funny way of preparing you for what's to come. 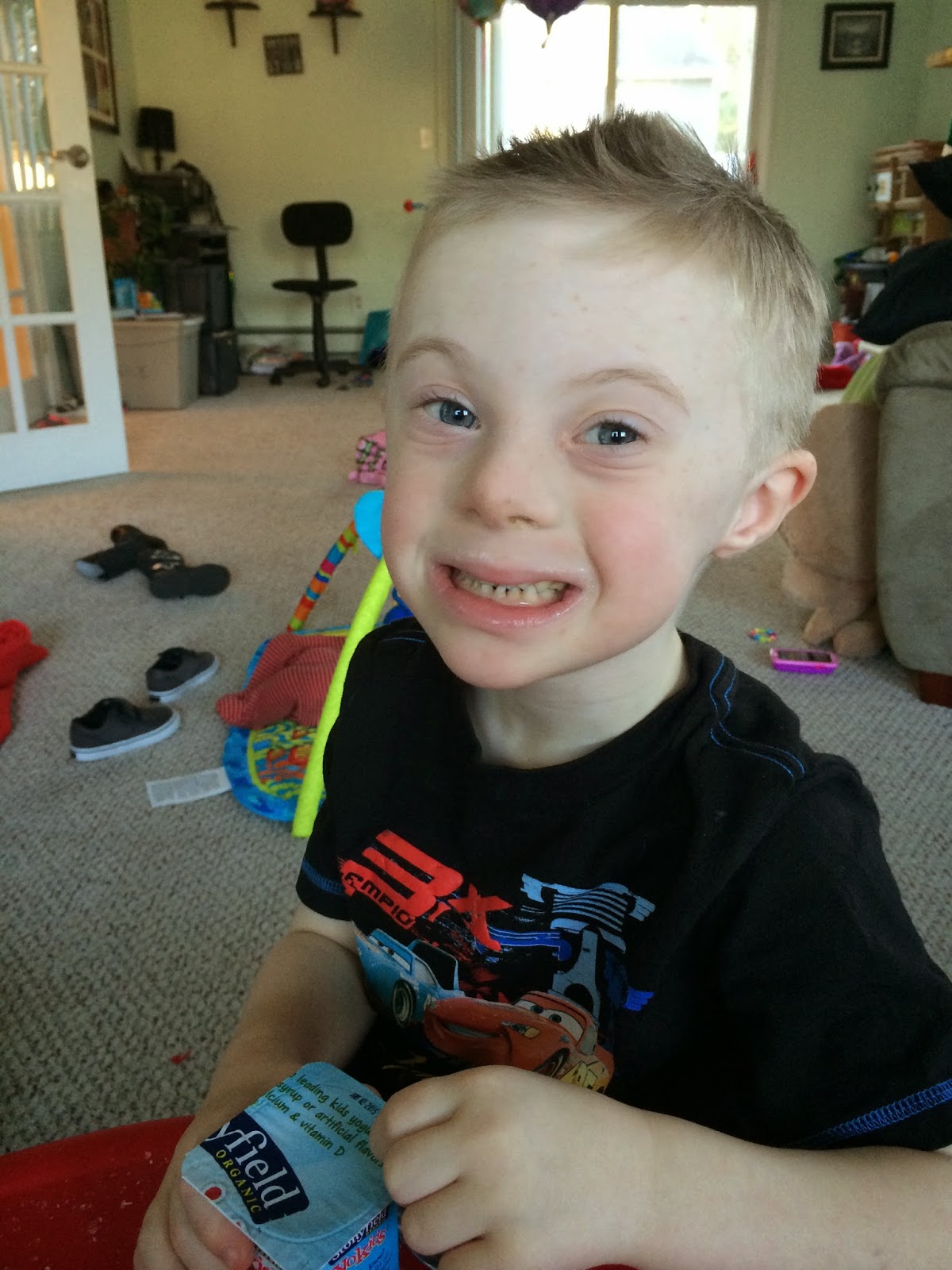 It's no secret that Colin's year of Kindergarten﻿ has been a little bit more of a struggle that we had anticipated and working through can be frustrating and very discouraging at times.  However, as I scrolled through some of those YouTube videos of Colin when he was younger, particular that video above, I am reminded how Chris and I have always believed in Colin and have always pushed him through each of those challenges.  Colin sat on that little piano bench as I made him stand up over and over and over again. I can honestly say that every day has its own unique challenges where some days I feel like patting myself on the back at the end of it and others, well, let's just say some adult beverages call my name.  But the thing is, we keep pushing and working and cheering our way through each challenge knowing that we will all get through to the other side. 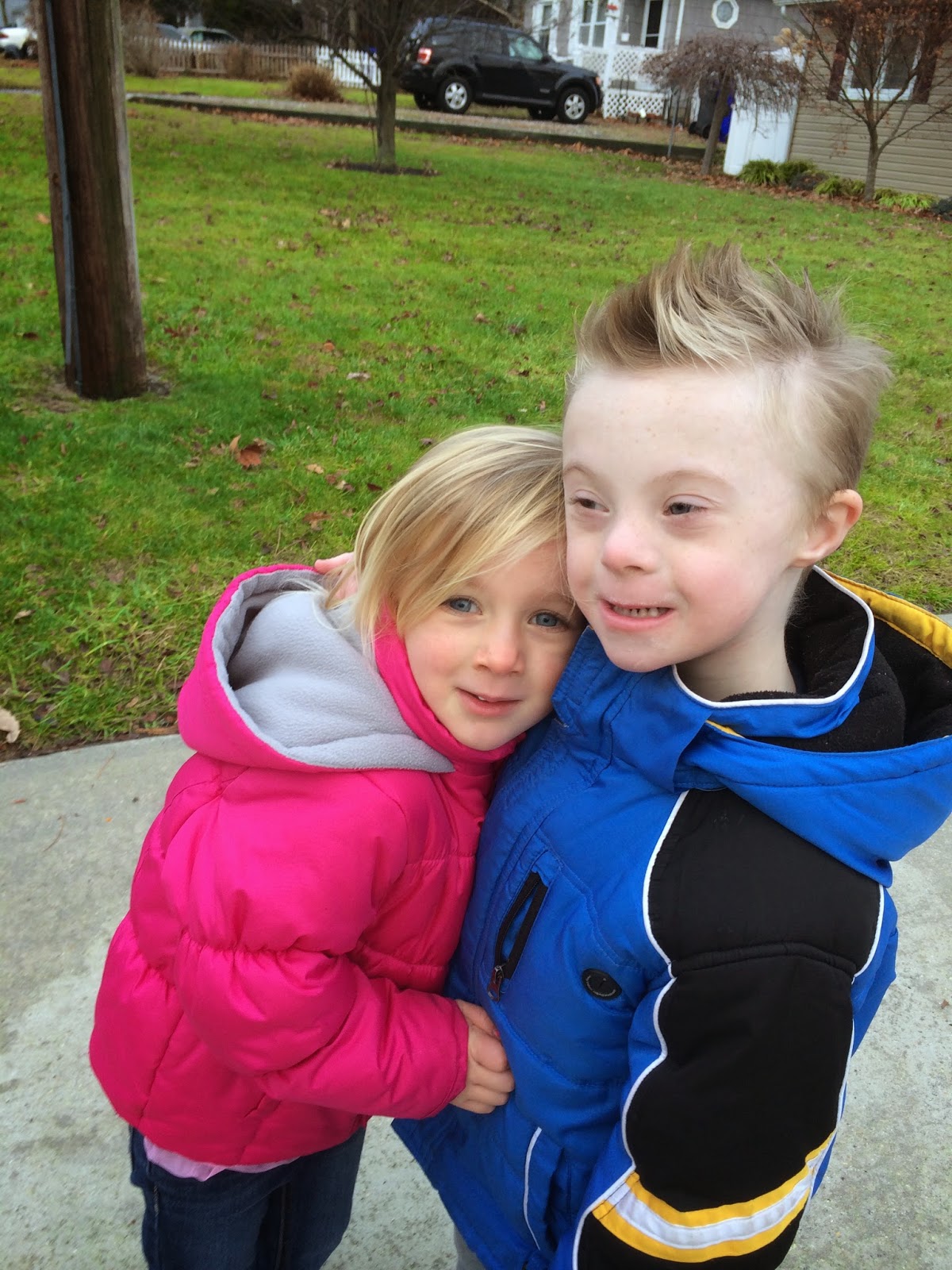 I've been asked more than I would like to admit if the current struggles have caused Chris and I to change our minds about Colin's placement in a general education classroom.  My answer is no and will continue to be no.  The thing is, I believe in Colin and know what he is capable of.  We made an educated decision based on the support of 30 years of research for children with disabilities in inclusive settings. We didn't make a decision solely on something that we want but on a combination of research and the belief that our child is capable when given the right tools to support him. 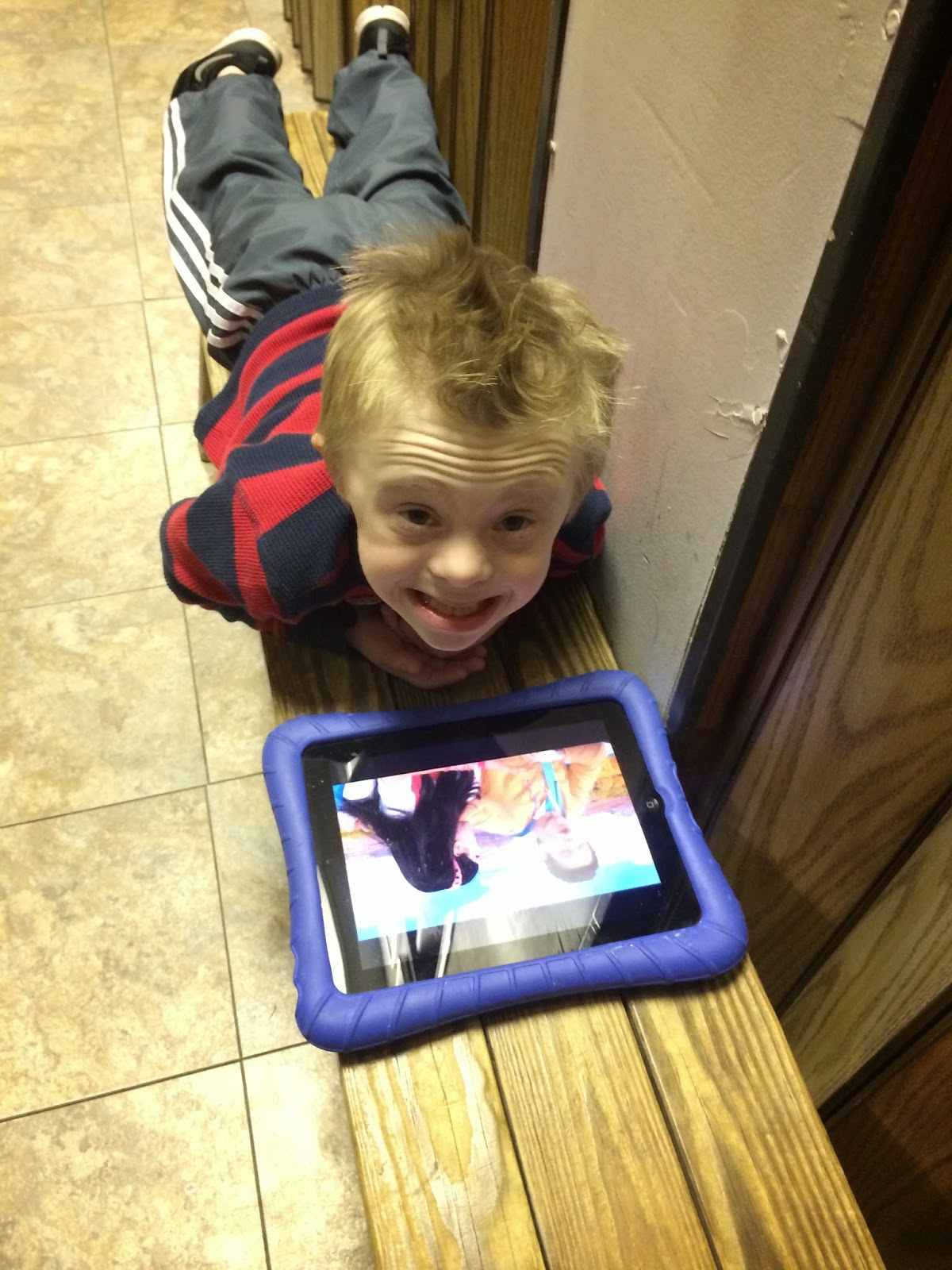 Just like all of those days that we made Colin practice standing over and over again, we will continue to "stand up" over and over again in support of his education and what he needs to be successful. This IS hard and I've cried more tears out of frustration for Colin but I know what he is capable of.  We just need to continue to work to set him up in the best possible environment so that he can continue to make the progress we know he can make.  The key is a mindset for all involved that he can do it and the tools to make it happen. 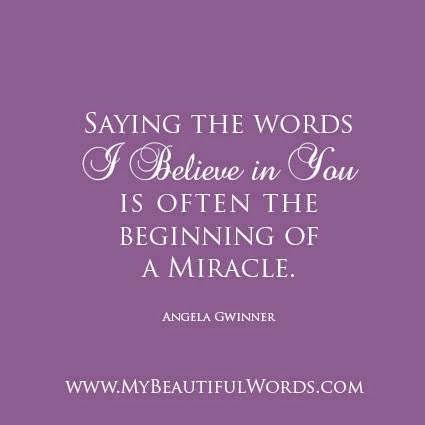 While figuring out the academic component is still a work in progress, we have seen so many successes along the way for Colin.  It was fun listening to him sing songs the other night and hearing the clarity in his words.  It's amazing to hear all of the words, phrases and even sentences that have been pouring out of his mouth lately.  I had to pull up a video when Colin was "talking" but we couldn't understand anything he was saying.
﻿
﻿
...and this is him the other night singing his songs.
﻿
While some of the behaviors that have been new this year can be challenging, I have also spent a lot of time researching and have found many strategies that we have been using that have been successful (more on those in another post).  Just tonight, while we were on the way to the bathroom, he started rubbing my arm (instead of hitting it out of disgust for having to get ready for bed) and I was focused on something else that I didn't praise him for it right away (we implemented this strategy by asking him to do something we preferred like arm rubbing to replace something we didn't want him doing like hitting).  He started saying "Mom! Look what I am doing!" with a big smile and so we did a happy dance because even though he was frustrated for having to get ready for bed, he chose the alternate positive behavior as opposed to one we didn't like without being prompted to do so. ﻿ 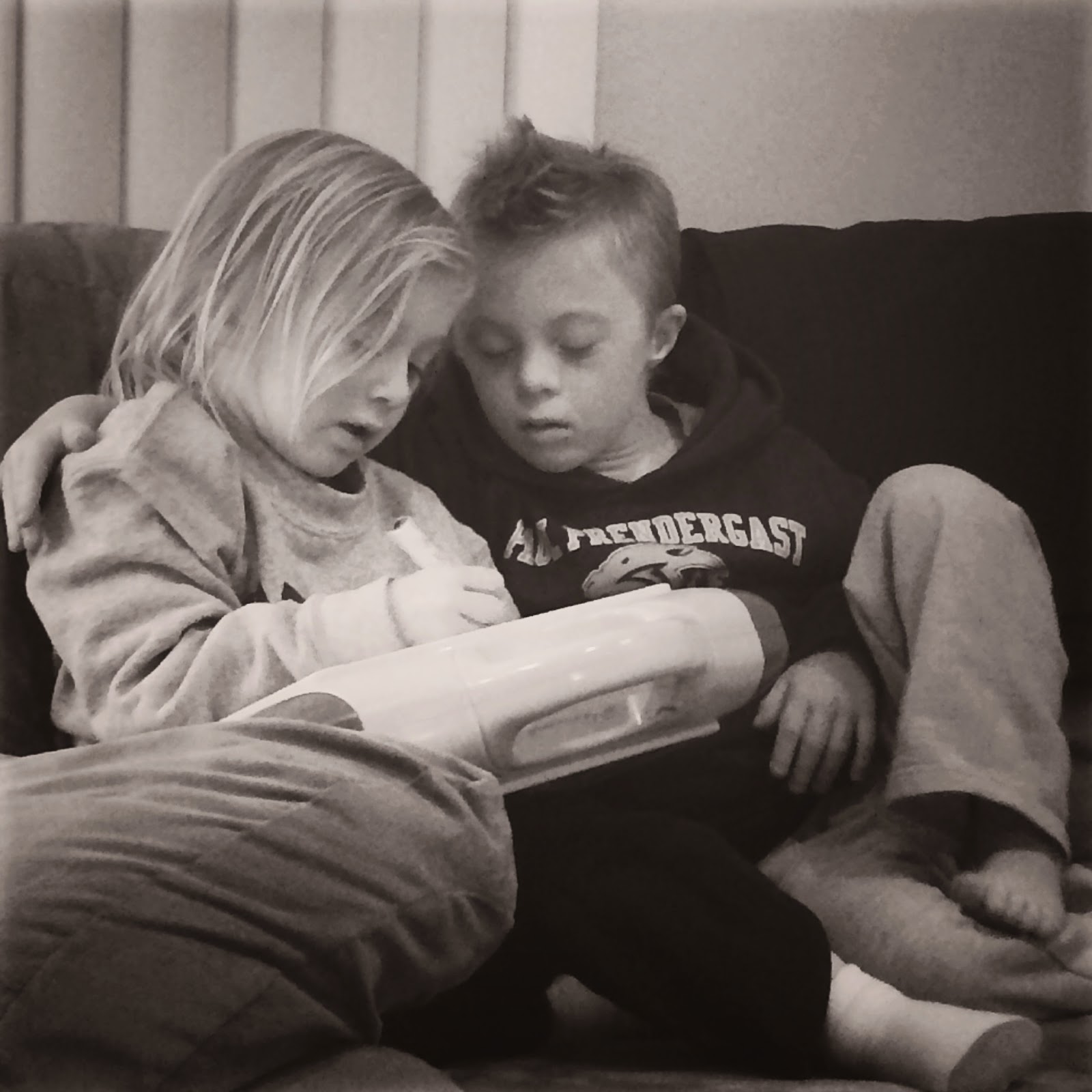 He has been so helpful and loving with Cody and will generally do most things when asked.  That's not to say that every day is perfect because there are lots of days when it seems like nothing works, but the progress is there. 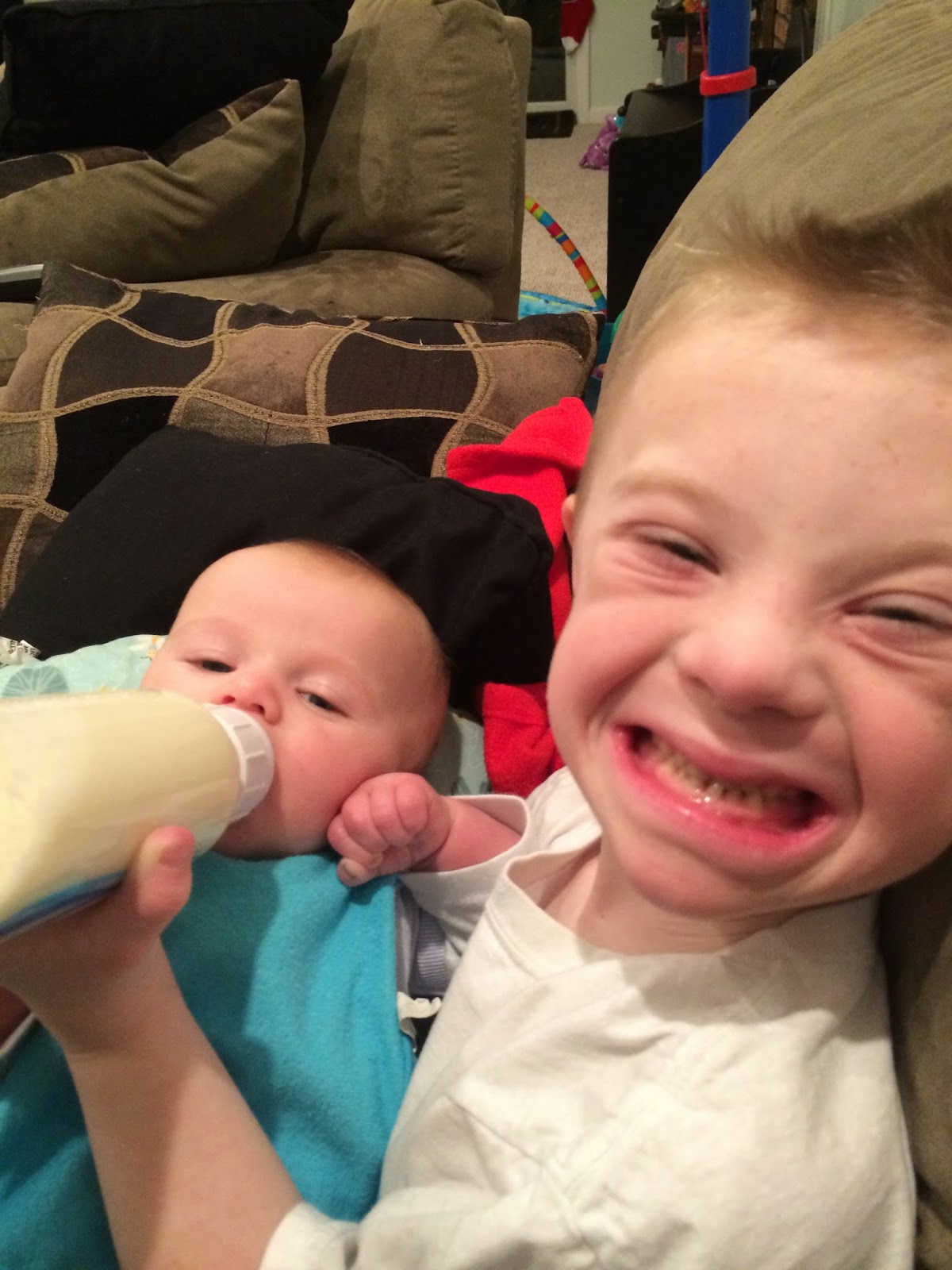 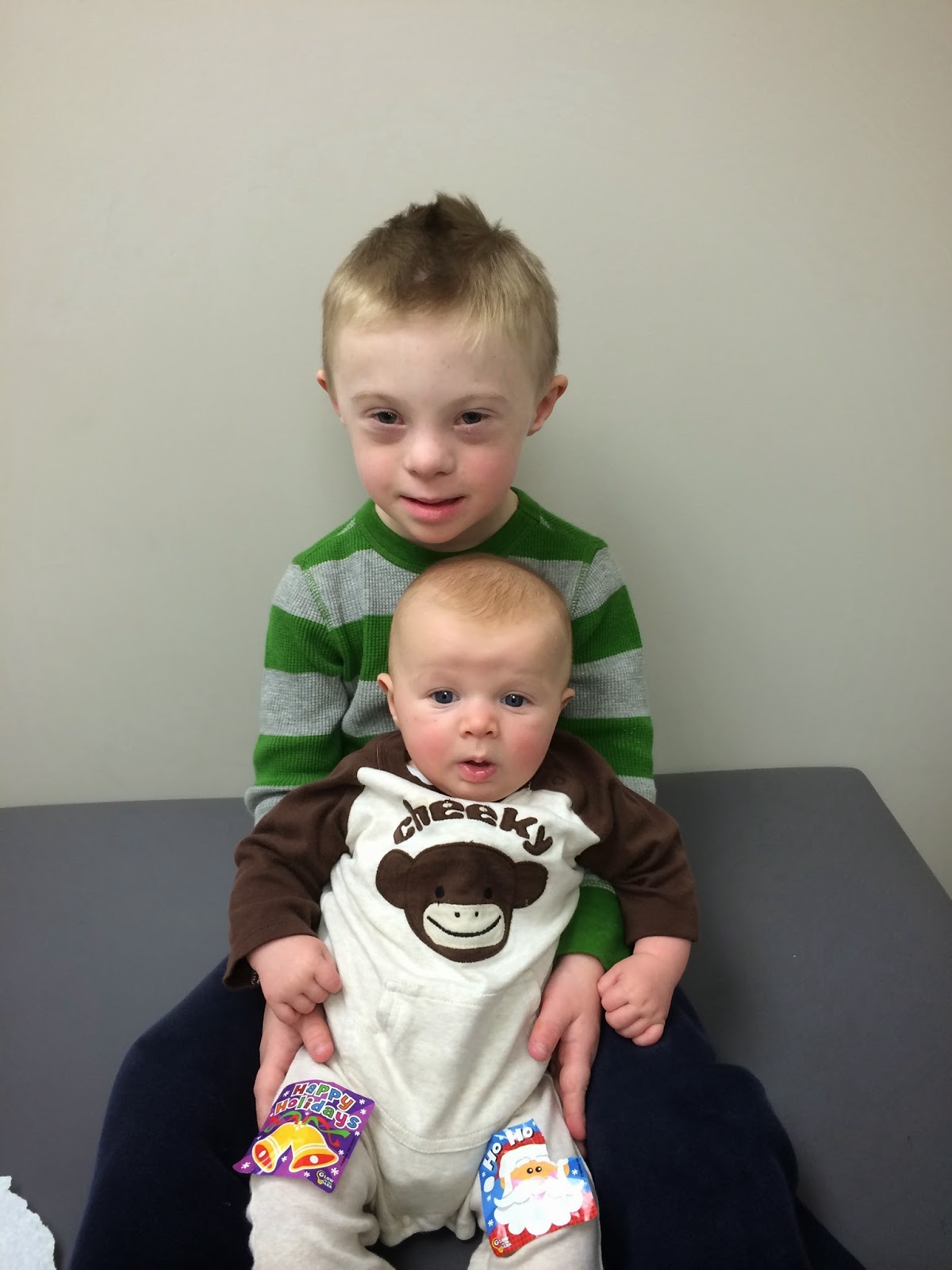 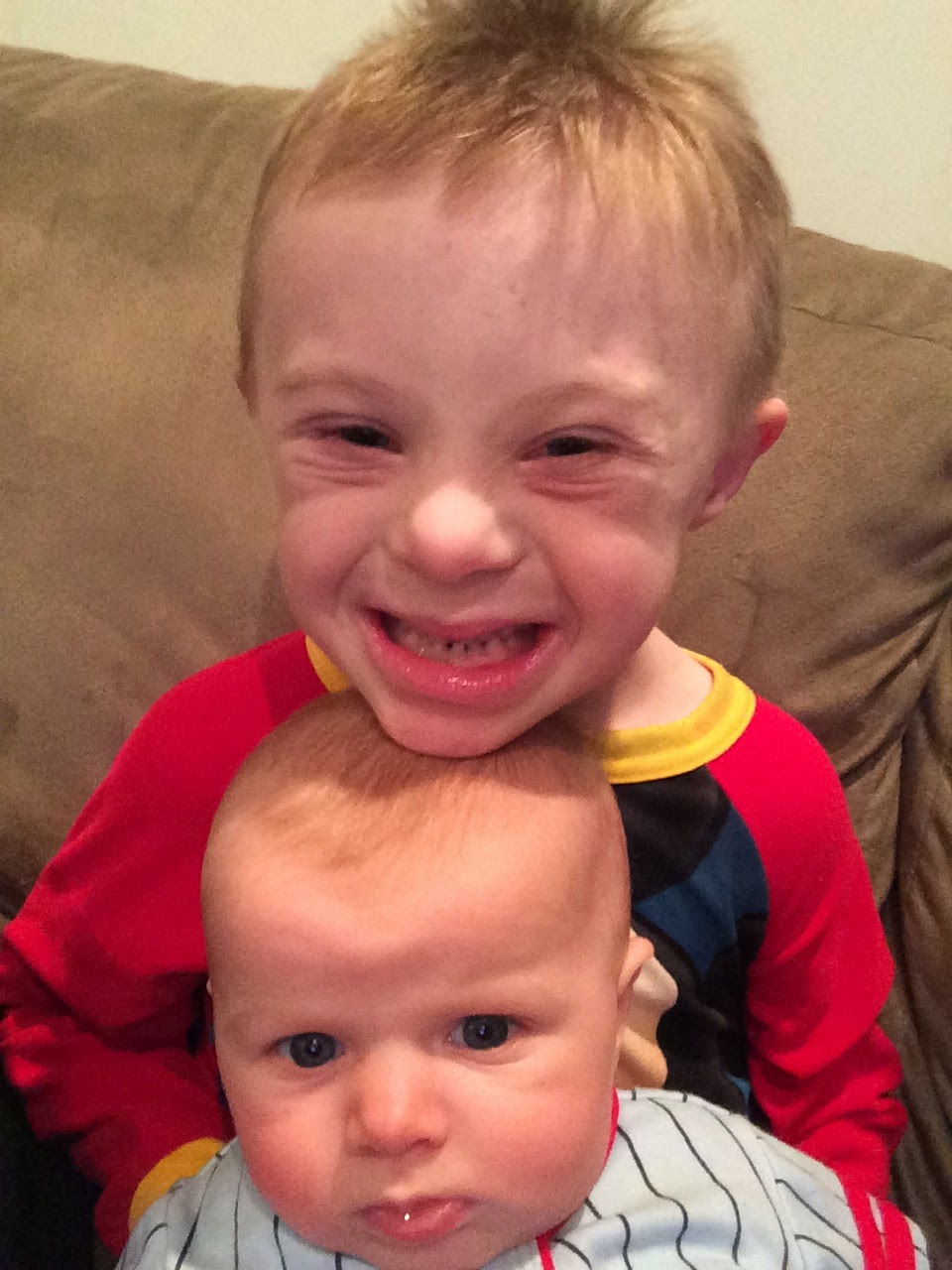 Spending that time with the family with the little girl with Down Syndrome the other day was just what I needed to slow down for a minute to look at how far Colin has come and to celebrate the things that ARE going well.  I felt like we lost sight of this a little bit because what ISN'T going well is always being highlighted and we are constantly seeing things show up that states it isn't believed that Colin is where he should be in school.  I'm praying for answers for this but in the meantime, I am going to continue to be so proud of Colin for how far he has come and for all of the things that he IS accomplishing. 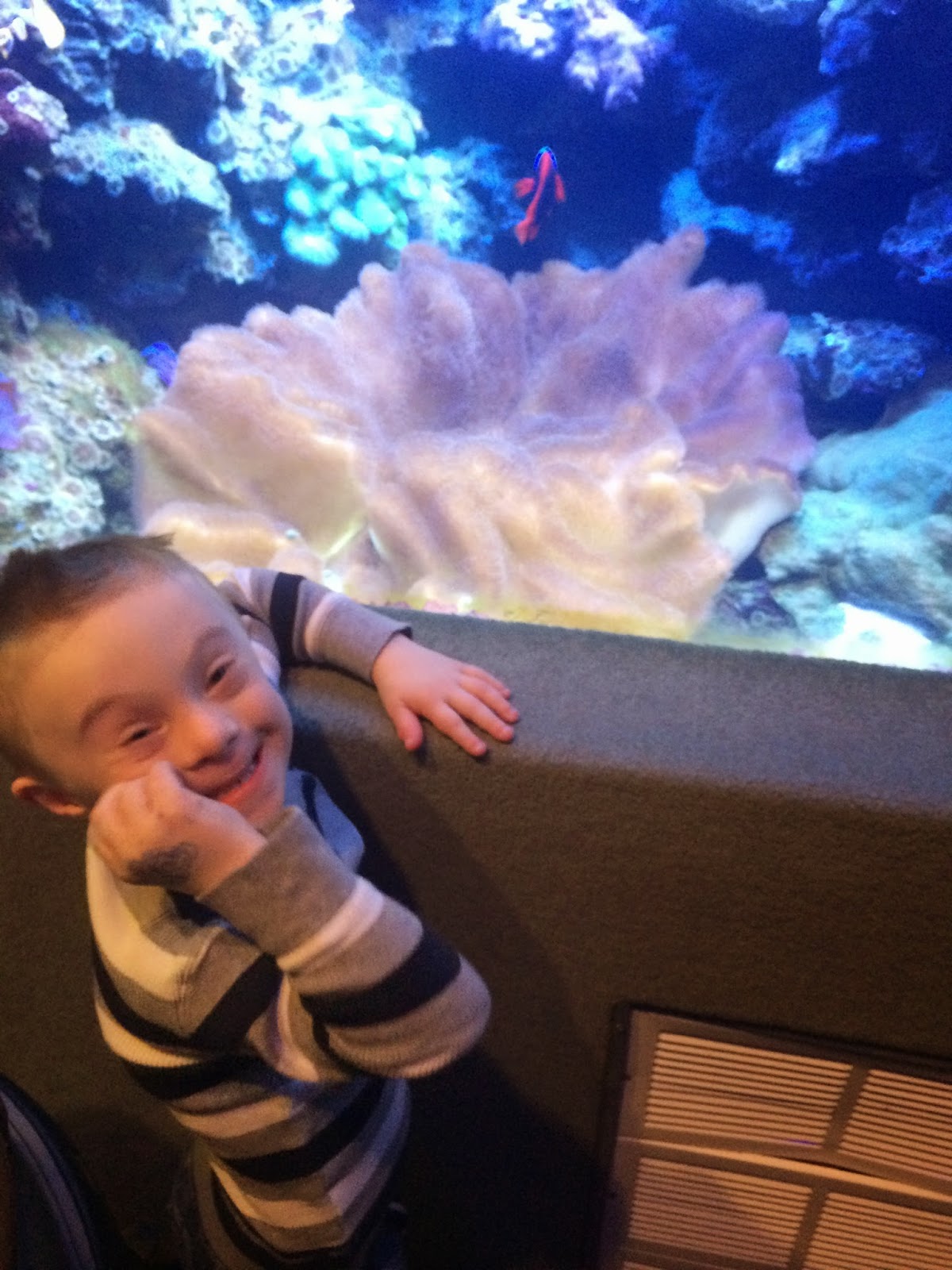 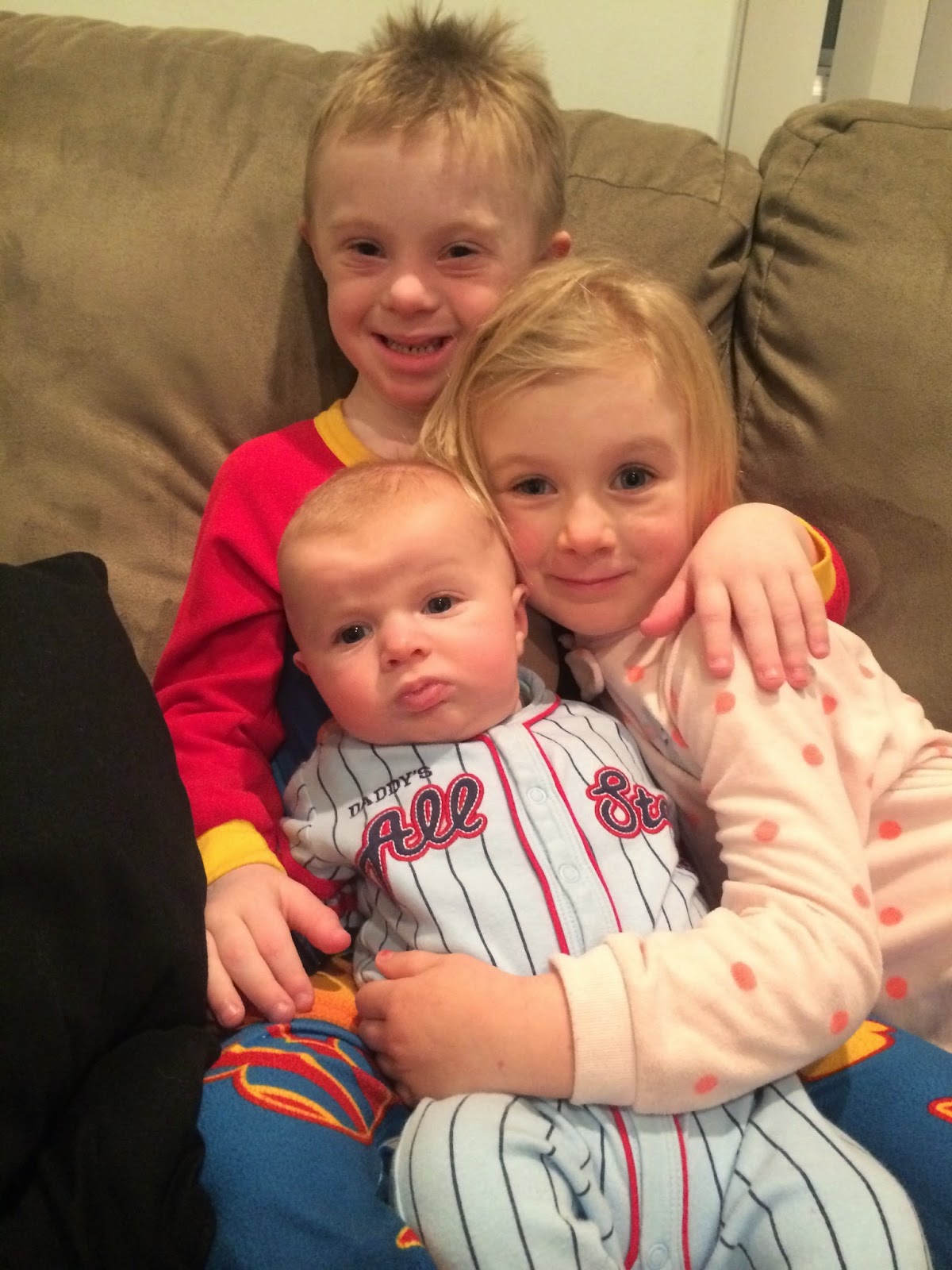 Oh and this HUGE success happened today! Colin's been really into puzzles lately and so we have been working together daily on putting puzzles together.  I noticed from afar today that he had taken out the Frozen puzzle and started putting it together all by himself (that in itself was HUGE because he ALWAYS asks for help when he wants to do a puzzle).  He got about 3/4 of the way through and then got a little frustrated so I sat with him to offer moral support and he finished the WHOLE thing by himself.  We are SO PROUD of him!
﻿ 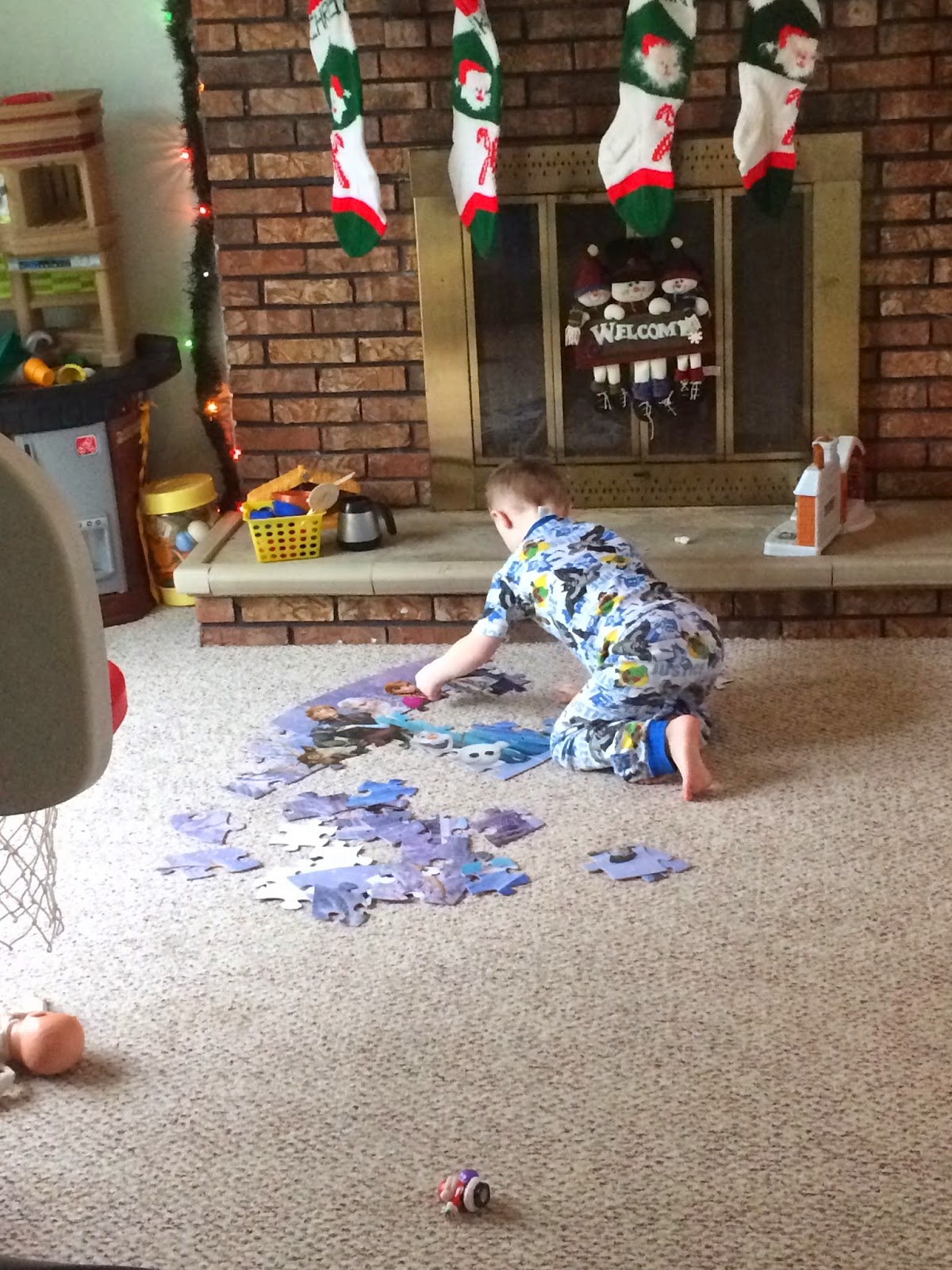 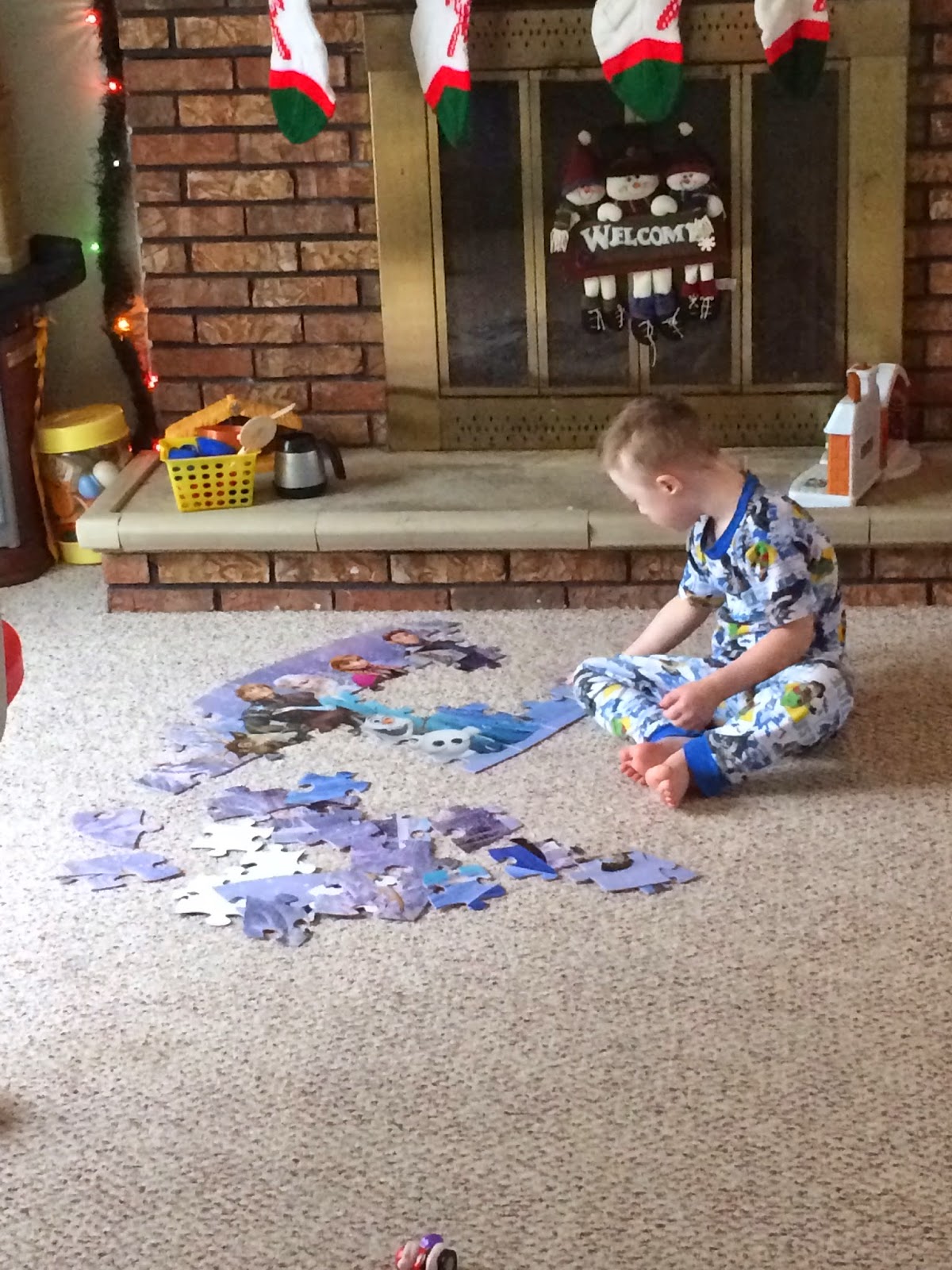 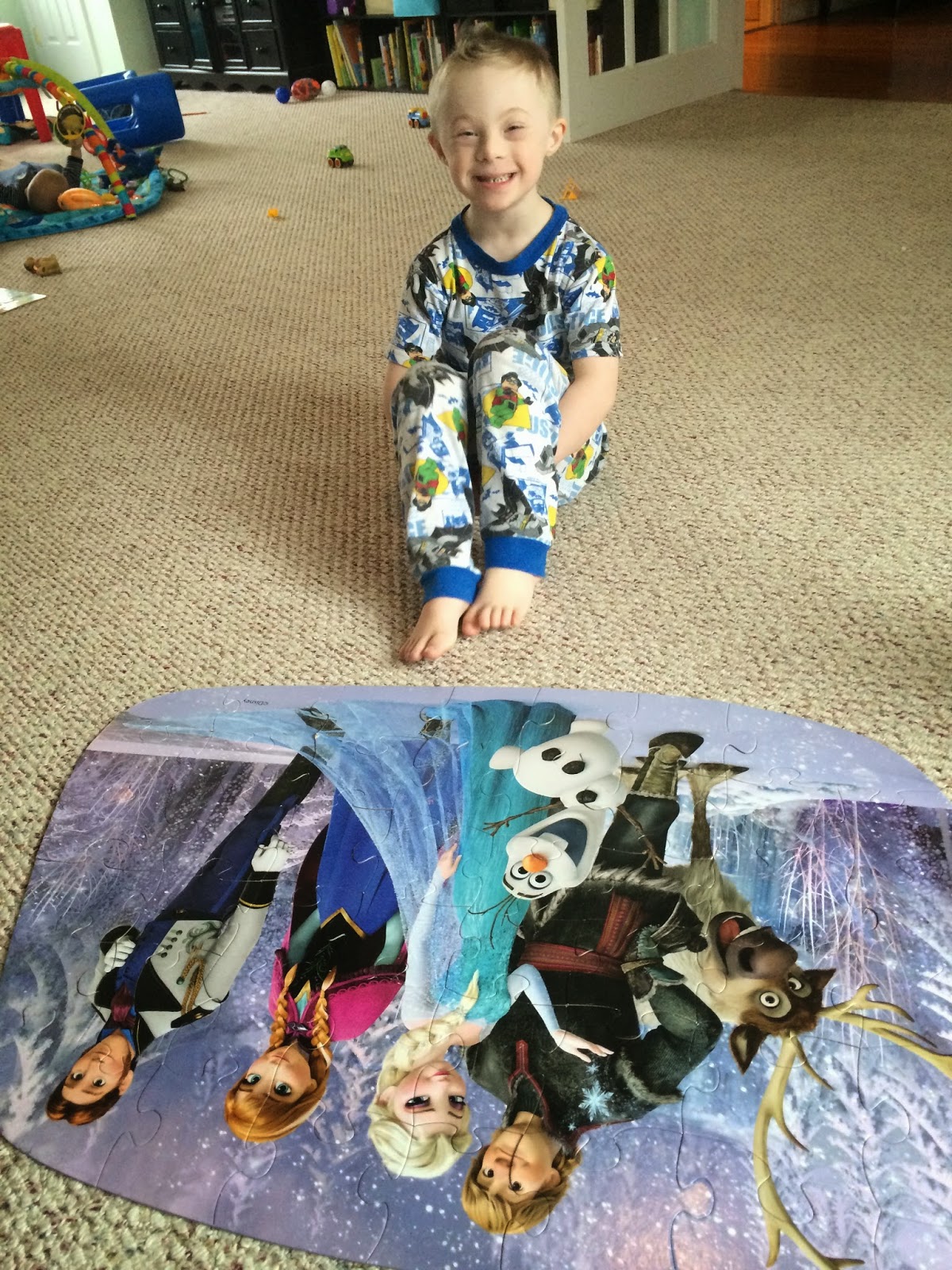 Loved everything about this post...Just beautiful. And your new header on the blog is so awesome, looks fantastic!