I'm glad that it has now taken me a bit of time to write this post after a meeting last week because some of the anger has now worn off and I can talk about it a little bit more calmly.  It also helps that I am fresh off of a conference held today by the New Jersey Coalition for Inclusive Education﻿ that was geared mainly towards teachers but had a lot of components for parents like myself.  I am feeling more determined than ever and although I am wary about what challenges lie ahead, am still 100% confident that Chris and I have made the best possible decision for Colin in choosing an inclusive education. 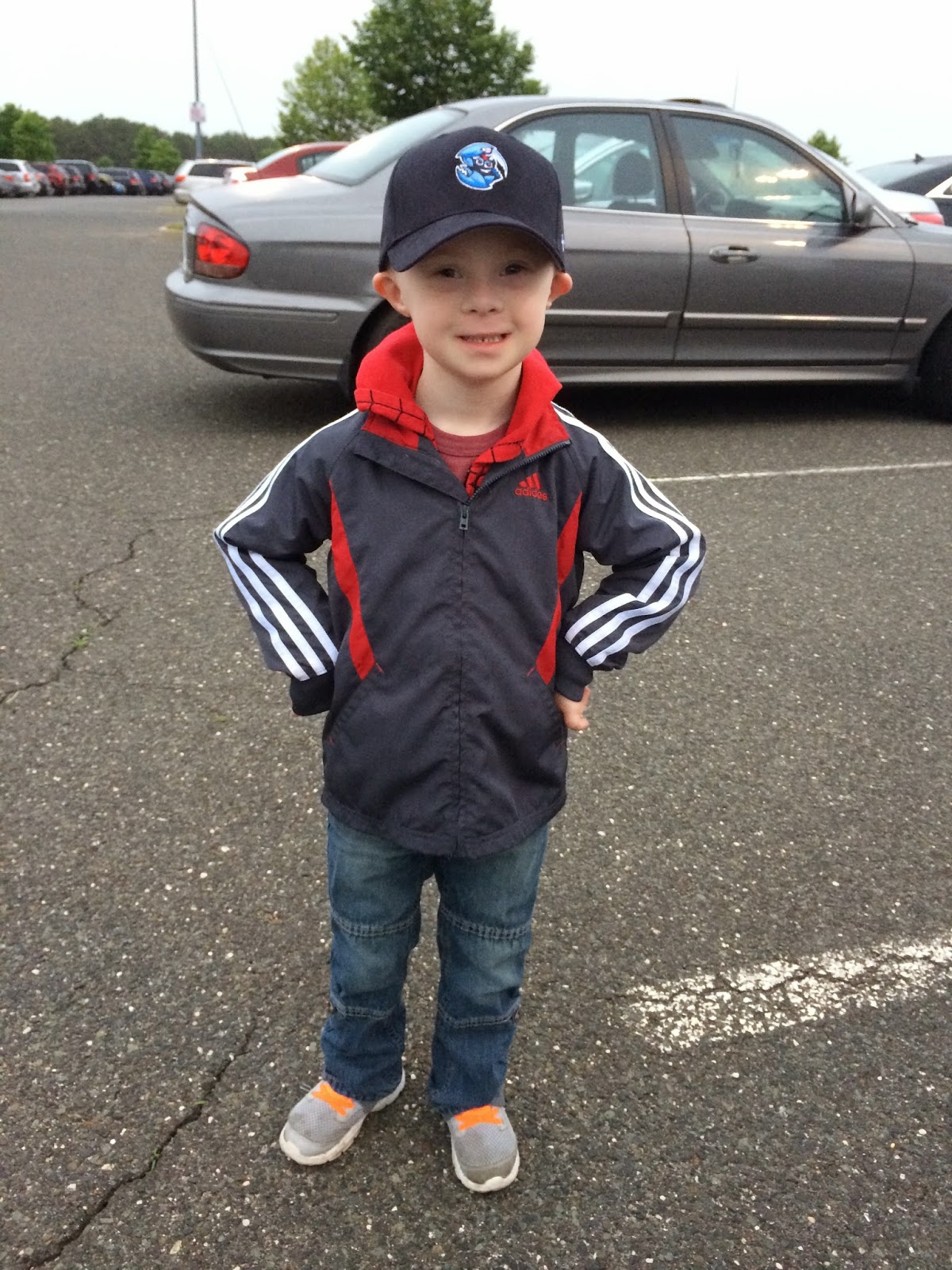 ﻿
After our last IEP meeting, there were some hold-ups that I had discussed regarding the acquiring of a paraprofessional for the times of the day in Colin's classroom when a special education teacher would not be in there supporting the classroom teacher (which is all but 80 minutes of the day).  When we initially asked, we were looking for a ratio of 1:3 or even higher because Chris and I did not want someone who could ultimately be doing TOO much for Colin.  As I mentioned in one of the last blog posts on the topic, comments were made but in the end after speaking with the Director of Special Services, they were going to grant us what they dubbed a "program paraprofessional" who would be in the classroom for any of the students with IEPs (essentially the ratio that I had asked for).  A meeting was set up for the last week of school so that we could meet with some members of the home school that Colin would be attending to be able to put in writing exactly what times of the day the para would be in the classroom.  We were excited to be able to meet at the new school and had actually been looking forward to the discussion.  ﻿ 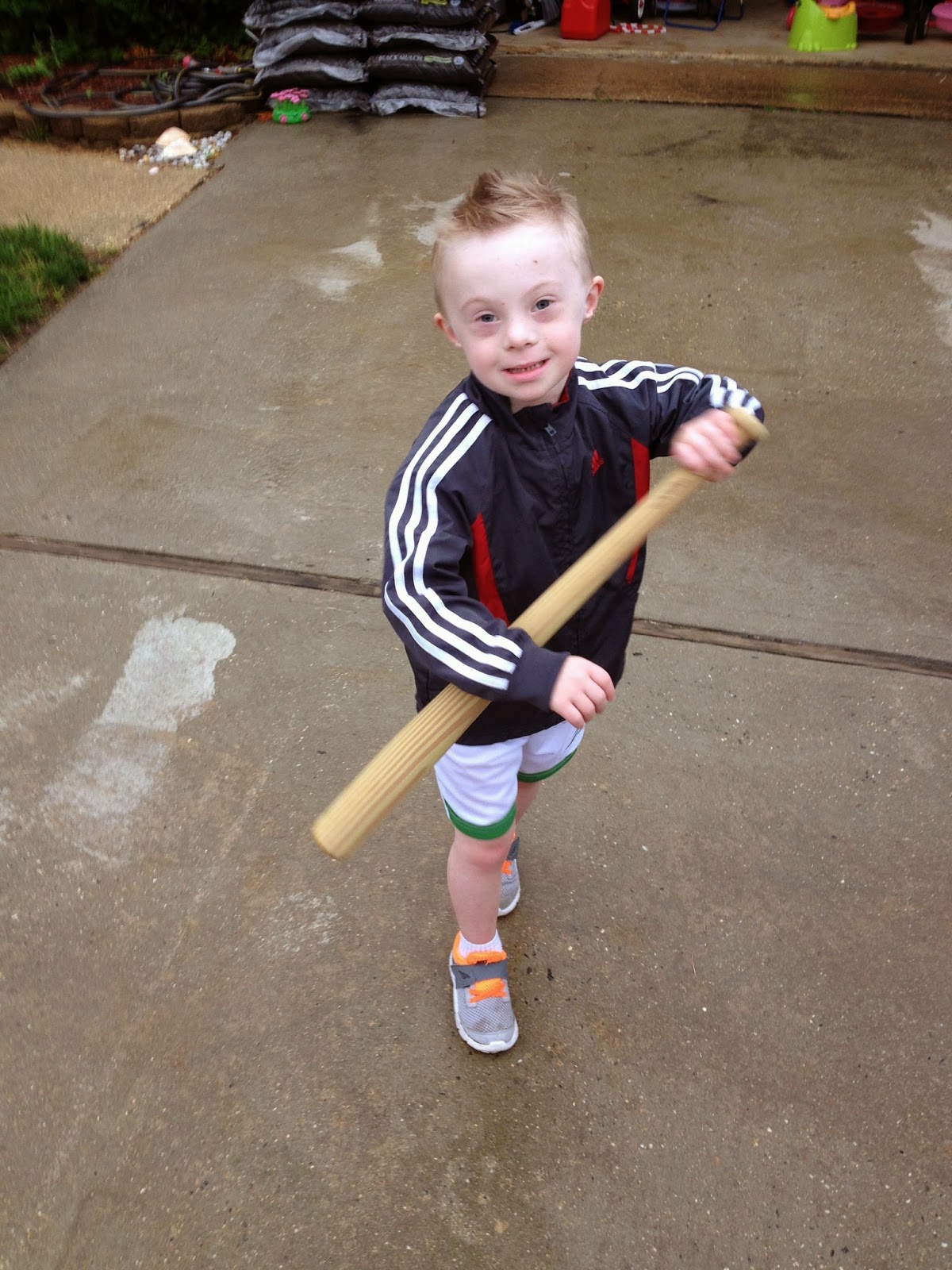 The day of the meeting, Chris and I pulled into the parking lot just as Colin's current teacher and speech therapist (she ended up being "dismissed" from the meeting because I guess they only needed the teacher's input) were and we immediately became suspicious as to why they would be there when we were only supposed to be discussing the paraprofessional schedule for the day.  After introductions were made (the meeting included Colin's current teacher, the case manager we finished the year off with, Director of Special Services, principal of the new school, school psychologist, Kindergarten teacher, and what would be our new case manager) the meeting took a quick change from what we were expecting when the new case manager took over.  I will tell you that from that moment forward, Chris and I felt as though we were ambushed (I do realize that this is a harsh word to use but I will remind you that we only were told we were attending the meeting to discuss a program para) because the case manager immediately had a "tone" when she wanted to discuss their "concerns" about our decision to place Colin in a general education classroom.  In her words, "I just want to understand why you would make this decision".﻿ 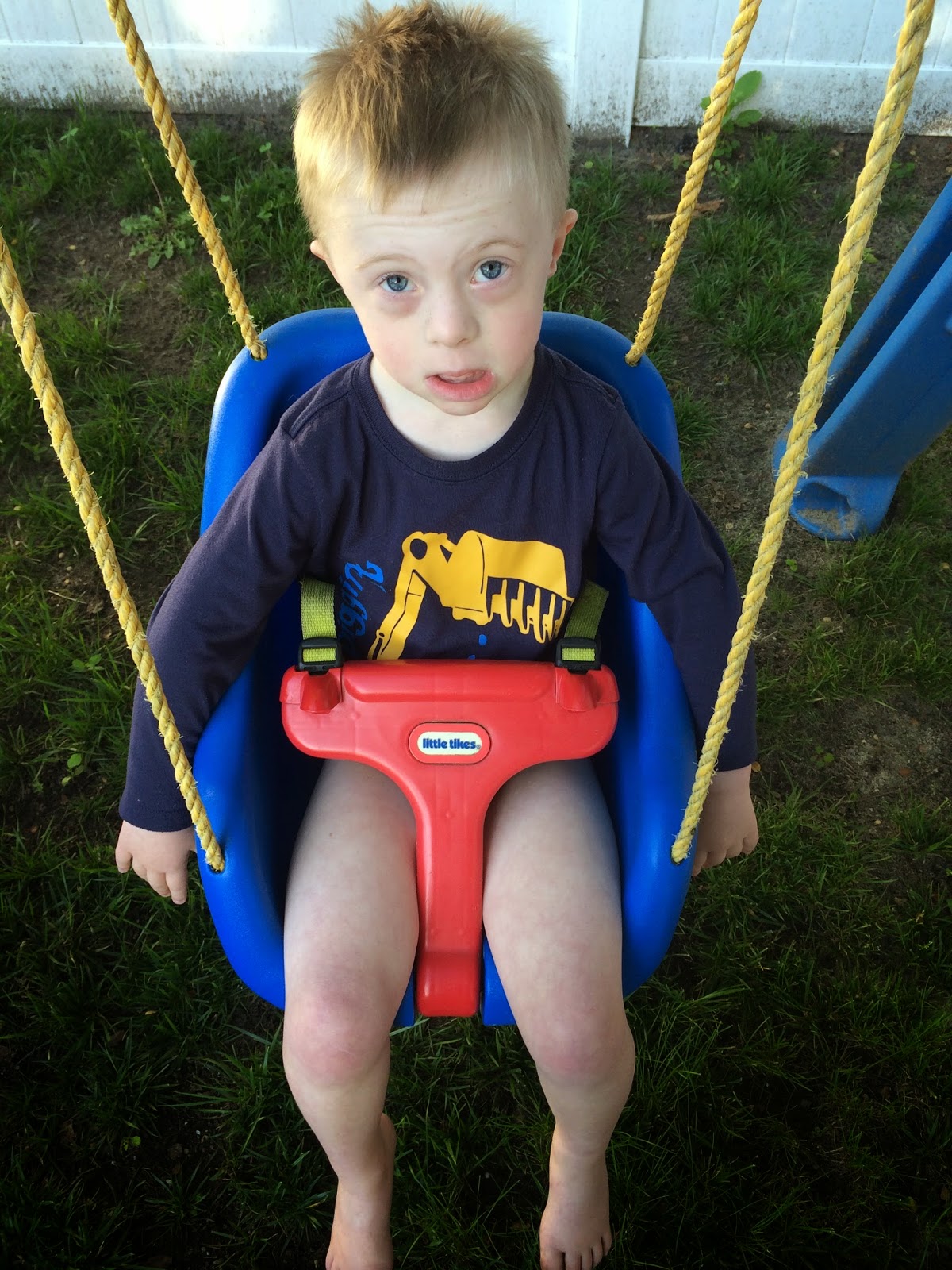 To approach this issue, they asked Colin's current teacher to discuss his progress in the classroom and while there were some positives discussed, the subsequent questions centered around the challenges that she has faced with Colin this year.  I felt that she gave a really good overview of Colin's behavioral challenges this year (mostly due to transitions) and also discussed tactics she used to combat these challenges.  The new staff brought up concerns that focused on these behavioral challenges, potty training, and his current academic level.  Academically, they were concerned that a gen ed classroom would be overwhelming and frustrating for Colin so to further pursue this issue, they had the Kindergarten teacher discuss how "rigorous" and "demanding" the class is including the fact that it's a "really long day" for someone like Colin.  In fact, "what do you think the other kids will be thinking when Colin has a tantrum".  We immediately cleared up the fact that Colin doesn't have tantrums but rather difficulty with some transitions (thankfully Colin's current teacher backed us up on that one).  So I asked her if any of the other students in the classroom ever had any behavior issues through the year and they all said "No, actually, this has been a really great class this year".  Riiigghhhttttt, not one reprimand, time out, loss of privileges, etc.!?  As Chris has said, these students must have been "handpicked by God"!﻿ 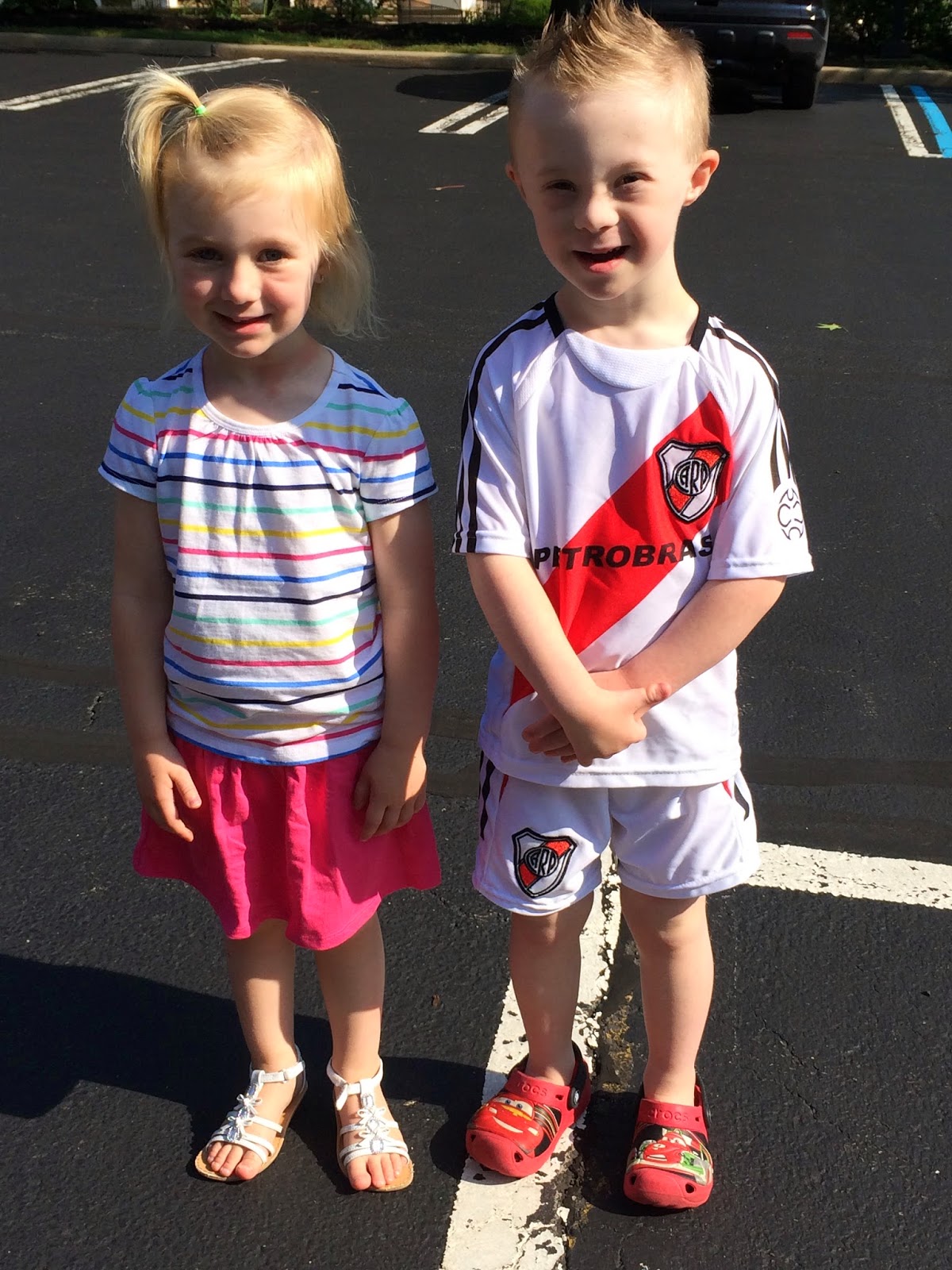 ﻿
By that point, my blood was boiling.  I was the most angry I had ever been in the process and couldn't believe the tone that the case manager had taken with us (it wasn't just what she said, it was how she said it).  I finally interjected and gave a spiel about all of the things I have openly discussed here on the blog as to why we chose this route and how we came to this decision.  I discussed the many benefits to inclusion, that his challenges were things we could work through together, our expectations for the future, the law, etc.  I truly believe after listening to them talk in that meeting that they have some perception of a little boy with down syndrome (particularly because behavioral challenges were discussed) and until they actually meet Colin and have them in their school, this perception will not change.  This is why WE need to show them who Colin really is.
So why did we choose inclusion?  We chose inclusion because we have absolute proof that it works.  From day one, we have raised Colin to be surrounded by his typical peers in typical environments.  He has attended a typical day care setting where he has made friendships with children who don't see the perceptions that adults have created.  ﻿
I am not saying that these friends have not seen some differences with Colin but it hasn't changed anything.  They have not acted any differently.  They have played and loved and helped Colin just like they would any of their "typical" friends.


Colin has ALWAYS learned best by observing first and these children have been models for appropriate behavior, speech, social interaction, and other skills that Colin has been working on.  ﻿ 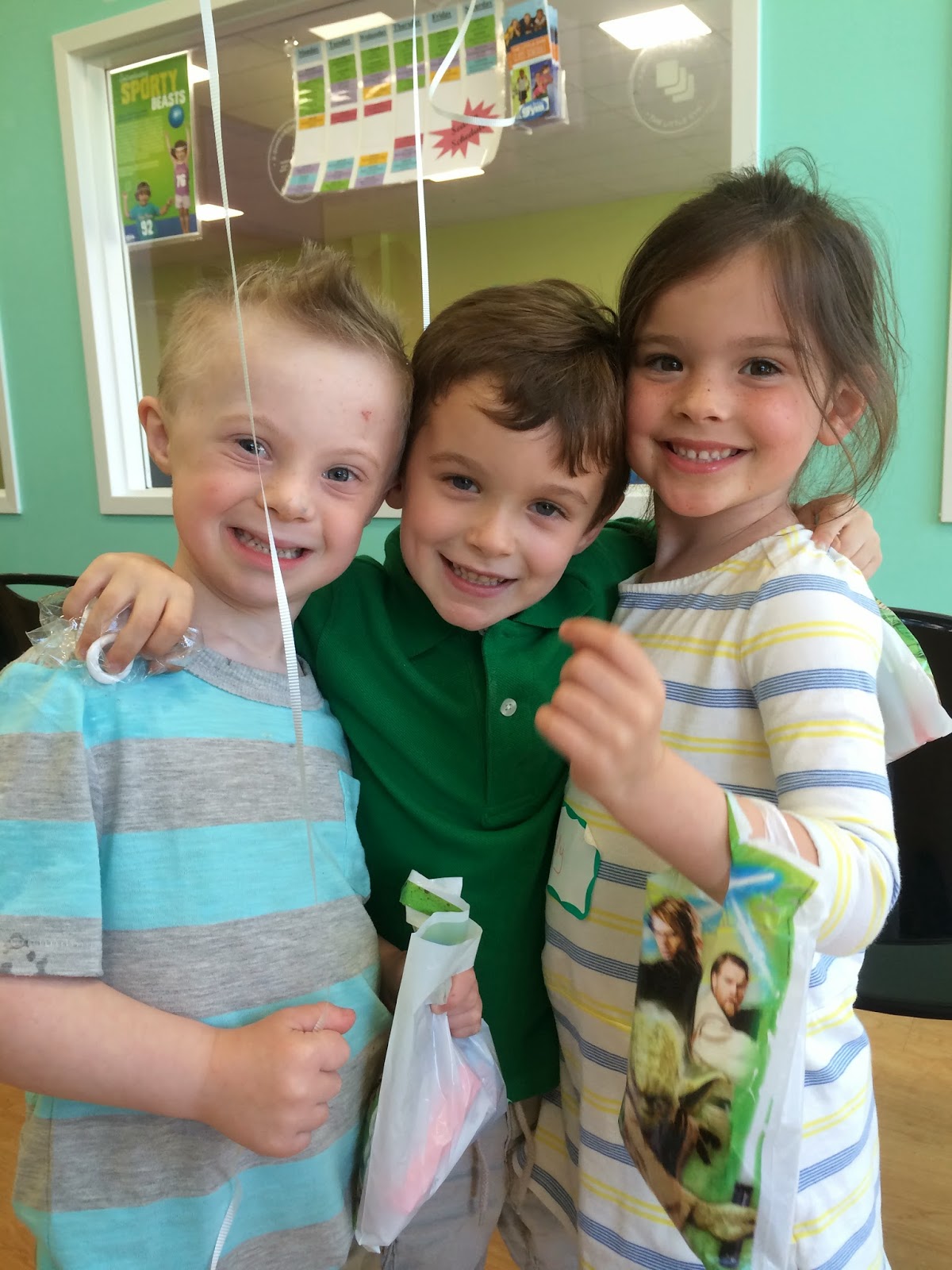 If you ask any one of the numerous teachers that Colin has had since he was 6 months old, they will ALL tell that there have been challenges they have had to work through and guess what?  They have all worked through these challenges and have been integral parts in Colin becoming who he is.   We KNOW without a doubt that Colin will be successful in a Kindergarten class with his typical peers but it might take some time for all of us to work through some of the challenges that Colin faces.  After the meeting was over, I sent an email to the principal (she seemed to ask the most productive questions towards accepting this) and (hopefully) painted a better picture as to who Colin was than what was presented in the meeting with pictures and a video. 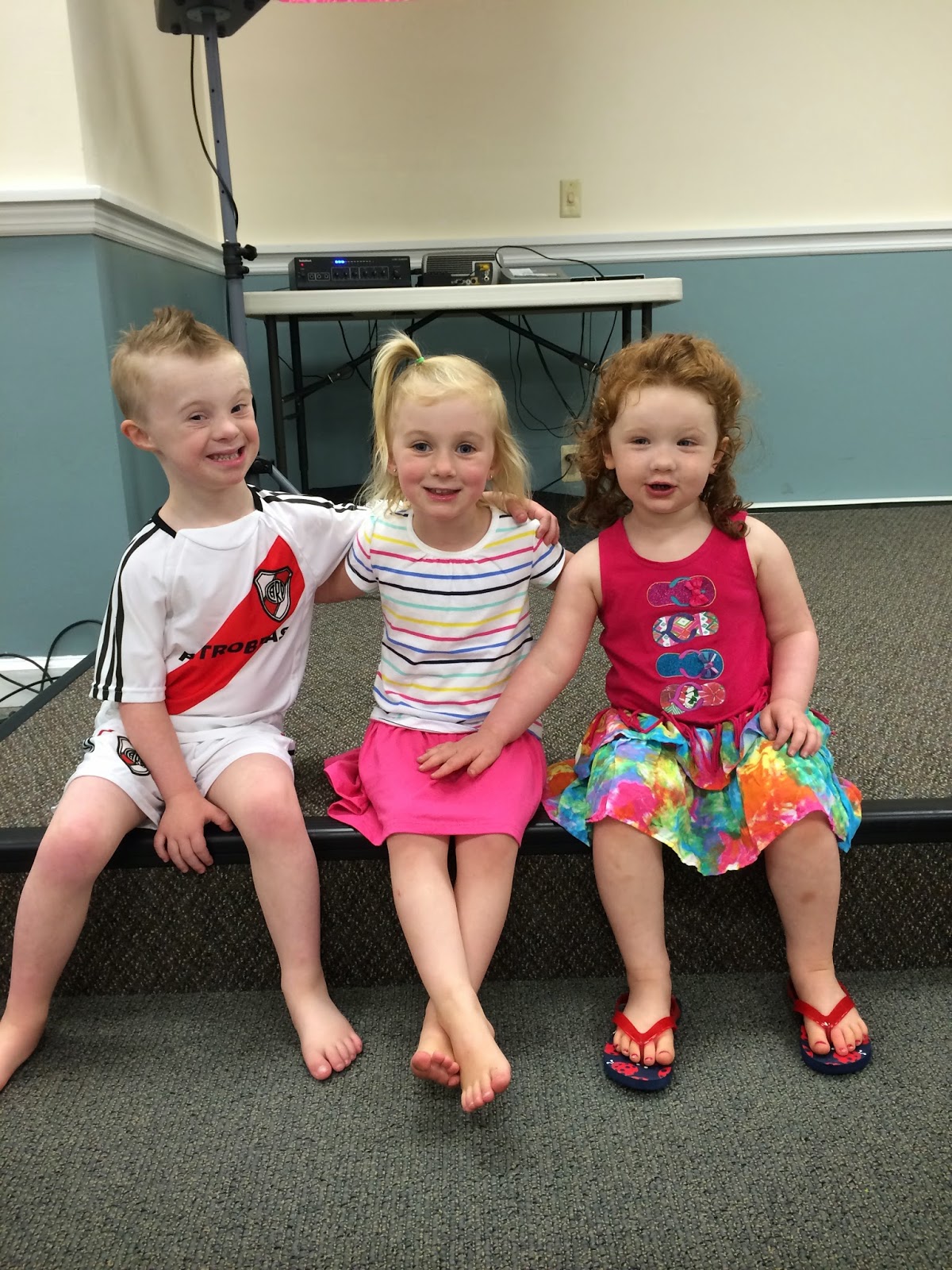 If only kids could teach ADULTS a thing or two on inclusion!!  They are the ones that show it works.  They already show what compassionate, helpful, loving human beings they are...

You go girl! I have a 11 year old girl who we have fought for inclusion for her entire schooling. What we found the kids are great, very accepting of our daughter. It has always been the adults/ school staff that has given us a run for our money. It just amazes us how the kids are so accepting and would do so much better if the adults would leave well enough alone . It seems like if the school has to be put out in any way to make inclusion work, they quickly want to go to a more restrictive setting.

Do not let any case manager treat you that way. You are Colin's parents and you know what is best for him.
You have every right to request a new one, one who will truly advocate for Colin .

You are so correct that research shows if inclusion is done correctly Colin will gain so much.

You are such great parents , always trust your heart and your beautiful son will soar!